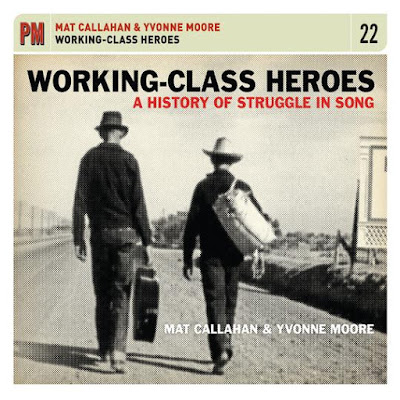 If you were inspired by Mat Callahan and Yvonne Moore's updated 21st-century musical arrangements for and spirited singing of protest folk songs (that IWW organizer/Irish socialist labor organizer and 1916 Dublin Easter Rising executed leader James Connolly wrote in the early 20th century) in their 2013 Songs of Freedom  cd, you're likely to also be moved and inspired by their latest cd, Working-Class Heroes: A History of Struggle In Song.

As the liner notes for their 2019 Working-Class Heroes cd (which is being distributed in the USA by both PM Press and Free Dirt Records) observes:

"The most essential music is conceived by real human beings: ordinary, anonymous, often poor-people who stood up and joined together to fight injustice and institutional oppression. This is the story of  Working-Class Heroes: A History of Struggle in Song, a collection of American working-class, pre-World War II folk songs revived by Mat Callahan and Yvonne Moore. Here the duo presents 20 songs written by both folk canon heavyweights and lesser known but equally gifted songwriters...The album is a collection of stories as much as songs--stories of the women and men who (sometimes literally) gave their lives to emancipate the working-class.

Most of the labor movement songs written by working-class labor movement organizers and/or working-class songwriters featured on Working-Class Heroes were included in the Hard-Hitting Songs for Hard-Hit People songbook compilation, of Wobbly and 1930's Depression Era protest folk songs, that Alan Lomax, Woody Guthrie and Pete Seeger put together in the early 1940's--which didn't get published until 1967. But some of these featured songs may not have been heard much by either older 20th-century or younger 21st-century labor movement activists, labor union members and U.S. working-class protest folk music fans--like "Come All You Coal Miners," "Come On Friends And Let's Go Down," "I Hate The Capitalist System," "The Mill Mother's Song" and "The Commonwealth of Toil."

In her spirited and passionate singing of the songs featured on Working-Class Heroes at a June 2019 performance of the duo at Encuentro 5 in Boston, Yvonne Moore showed that she's able to sing labor songs in as moving and intense a way as Hazel Dickens, Barbara Dane, Joan Baez, Judy Collins and Bev Grant were able to sing labor songs in the second half of the 20th-century. And, at the same event, Mat Callaghan was able to explain the historical context of the labor songs in the 21st-century that the duo sang as well as Pete Seeger did in the 20th-century; and  also to sing a great, entertaining version of Woody Guthrie's "Mama Don't `Low No Bush-Wahs Hangin' Around," that most Woody Guthrie fans in USA probably have never heard performed before.


The duo has also edited an accompanying 96-page songbook for their new cd (that PM Press is also distributing), titled Working-Class Heroes: A History of Struggle in Song: A Songbook. And as the blurb for this 2019 songbook notes:

"Most of the songs collected here are from the early twentieth century, yet their striking relevance to current affairs invites us to explore the historical conditions that inspired their creation: deep, systemic crisis, advancing fascism, and the threat of world war. In the face of violent terror, these working-class songwriters bravely stood up to fight oppression. Such courage and heroism is immortal, such heroes should be celebrated and their songs can still lift our spirits, if we sing them today..." 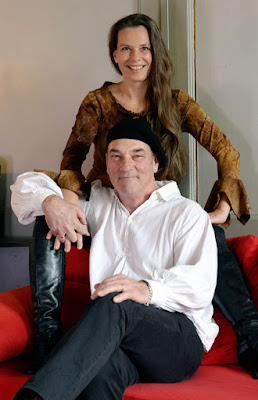